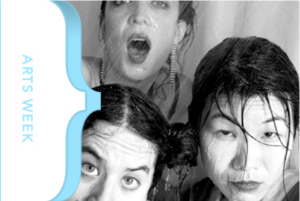 Is a city that bathes together a bubblier place to live? The multi-talented urbanvessel collective has scoured the notion of public bathing to come up with SLIP: a new site-specific performance. Created and performed at the venerable Harrison Baths and Swimming Pool on Stephanie (near Queen and John), the piece combines opera, Japanese folk music, dance and body slaps. Yes, that’s the sound made by body parts hitting the surface of a pool.

“The acoustics are really intense in there,” says composer Juliet Palmer, explaining that SLIP is exceedingly particular to its venue. The one-hour piece takes spectators from the lobby to the open-concept men’s locker room, where a Broadway-style number in the shower involves synchronized use of the time-release water spurts. Then the show goes poolside, then into the partitioned women’s locker room for a series of art installations. Palmer warns not to miss the final room.

The Harrison Baths date back to 1910, though they’re now housed in a 1960s building. They remain one of the few public spaces that people can use for free in post-amalgamation Toronto, and the homeless population is one constituency they serve. It’s literally a public bathroom. That explains one of the characters in the one-hour piece: part angelic prisoner, part traveller.

SLIP also has a strong Asian element, reflecting a neighbourhood that features regular Tai Chi in a nearby park. Yet another flavour comes from the naked swim that TNT Men hold in the pool on alternate Tuesdays.

“Anna [Chatterton], the writer, she’s spent a lot of time swimming there, hanging out, taking long showers, then writing,” says Palmer. The texts were distilled into songs, for which Palmer composed the visceral music and Yvonne Ng added choreography.

“Definitely there’s a sense of a kind of magical transformation of the space,” says Palmer. “We’ve been working mostly in its regular state — fluorescent lighting — so you see the hair on the floor, you see the grime. We want to make it beautiful, and in doing that, allow the stories embedded in this building to emerge to the surface.”
— GORD McLAUGHLIN