An interdisciplinary collaboration led by Urbanvessel in partnership with MABELLEarts and Mabelle residents of all ages and backgrounds. Road Map explored stories of transformation through song, sound, installation and live film-scoring.

We kicked off the project with Watermelon Smash…carving, eating, drumming and smashing watermelons. The best way to launch the summer! And we closed with a reprise of Watermelon Smash — transformed into song and Bollywood moves — as part of MABELLEarts’ mid-winter parade, Invincible Summer. Field recordings and songs have been woven into two brand new film scores: A Light in Midwinter and Waving Goodbye. Stay tuned for MABELLEarts new online documentary, launching 2015.

“Who Owns Mabelle Park?” performed by Alex Samaras and Christine Duncan, A Light in Midwinter, 2013. 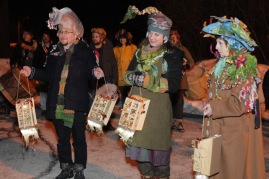